The interaction of an intense laser pulse with a nanometer-scale particle results in the generation of an expanding nanoplasma. In the past, nanoplasma dynamics were typically described by classical phenomena, like the thermal emission of electrons. In contrast, a new study on the interaction of intense near-infrared (NIR) laser pulses with molecular oxygen clusters now demonstrates that phenomena, which can only be described quantummechanically, play an important role. For the first time, evidence of efficient formation of autoionizing states in nanoplasmas is found. Autoionization of so called superexcited states of atomic oxygen is directly observed on a nanosecond time scale, whereas indirect signatures are visible for decay processes occurring on shorter time scales. Autoionization is found to take place in various systems and is expected to be important also in the interaction of finite systems with intense extreme-ultraviolet (XUV) and X-ray pulses from novel free-electron laser sources.

Following the interaction of intense NIR laser pulses with clusters, the recorded electron spectra typically show a smooth distribution. In the past, the absence of discrete state signatures in these spectra led to the conclusion that the dynamics of charged particles during the cluster expansion can be well described by fully classical behavior. As a consequence, simulations that model the interaction of intense lasers with clusters, nanoparticles or large molecules, often make use of quasiclassical approaches. With the advent of novel laser sources and time-resolved techniques during the last year, this picture began to falter. Recently, extensive formation of excited atoms in nanoplasmas driven by electron-ion recombination processes was reported. When an atom with 2 electrons in excited states is formed, it may decay via an electron correlation effect, where one electron is released into the continuum, while the second electron relaxes to a lower bound state. However, since the electrons emitted via such autoionization processes exchange kinetic energy with the cluster environment, they had not been observed in experiments so far.

In a collaboration led by scientists from the Max-Born-Institut, the first evidence of autoionization following intense NIR laser-cluster interactions is now reported. In the current issues of Physical Review Letters [114, 123002 (2015)] Bernd Schütte, Marc Vrakking and Arnaud Rouzée, and their colleagues Jan Lahl, Tim Oelze and Maria Krikunova from the TU Berlin present results obtained from oxygen clusters. This system was chosen, because oxygen atoms have previously been shown to exhibit long-lived autoionizing states. In the present study, clear peaks were observed in the electron spectrum from oxygen clusters ionized by intense NIR pulses (Fig. 1). These peaks could be assigned to well-known autoionizing states, and it was shown that they decay on a nanosecond time scale, when the cluster has already significantly expanded. Therefore, the influence of the environment on the electrons emitted via autoionization was negligible. The observed autoionization contributions were found to be very sensitive on the intensity of the NIR laser pulse. At higher intensities, the autoionization peaks were blurred out, but still visible. These results indicate that autoionization plays an important role in many experiments that study the interaction of intense laser pulses with nanometer-scale systems, even when these processes cannot be directly observed in the electron spectrum. Previously, it was demonstrated that the observed nanoplasma dynamics following intense XUV and NIR ionization of clusters are similar, and therefore, the current results are expected to be highly relevant as well for experiments at novel free-electron lasers. The experimental findings of autoionization are also important for improving theoretical models of nanoplasmas in the future in order to gain a better understanding of the underlying microscopic processes.

The presented results demonstrate that a description of nanoplasma dynamics by classical approaches is insufficient. Quantum phenomena like autoionization play an important role during the expansion of clusters following the interaction with intense light pulses. 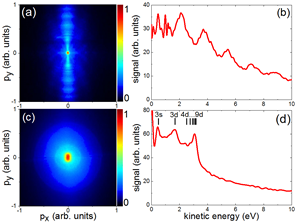